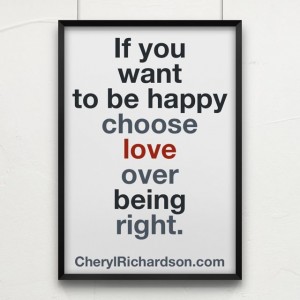 I’m live on the radio on Monday (6/23) at 5pm ET/2pm PT and I’ll be joined by Bob Olson to talk about his work as a private investigator who, upon the death of his father, began researching the afterlife more than fifteen years ago.  We’ll be talking about his fascinating book, “Answers About the After Life,” and taking your calls at (866) 254-1579.

You can listen at HayHouseRadio.com.

p.s. – Need a little Divine Direction? Use the “Touch of Grace” button on our homepage here. cherylrichardson.comtwitter.com/coachoncallFacebook.com/cherylrichardson

Don’t break a habit.  Dissolve it!

This weekend, as I travel back from Baltimore after speaking at the “I Can Do It” conference, I’ve decided to share a story from the book I wrote with Louise Hay called “You Can Create an Exceptional Life.”  This is a story I often read while on stage to demonstrate what can happen when we choose love over being right.

I hope it’s helpful to you…

Don’t Break a Habit – Dissolve it!

It had been a long drive, and we were almost out of gas-literally and emotionally. We’d gotten a late start after waiting longer than expected for the rental-car paperwork to be finalized, and there were now only a few short hours left before the park closed. When Michael, Ileen, and I finally arrived, we drove through the gated entrance and attempted to follow the directions to the parking lot. The signs were confusing, and my husband and I briefly argued about which way to go. I pointed in one direction, hoping that I was right, and no sooner had Michael made the turn that it became obvious I wasn’t. So, with eyes ever mindful of the empty fuel tank, we were led back onto the highway, heading away from the park without a turnaround (or gas station) in sight. At this point, Michael and I were pretty pissed at each other, but we were too polite to act out in the company of our friend.

I looked straight ahead at the road and quietly imagined love flowing from a Divine Source down through my body, out of my hand to his, and then into his heart. I kept this practice going for several minutes, when I felt Michael’s energy soften. As I continued to send him love, I noticed something interesting. I felt love, too. Instead of fuming about the wrong turn, I was suddenly more concerned about my husband. My heart softened as I imagined how he must be beating himself up. Why would I want to heap more pain on top of that?

While I was aware of the resistance I had to surrendering my ego, I had to admit that Louise was right. It did work.

Look what happens when a Steinway piano gets a massage.  Watch this week’s video here.

Life Makeover For The Year 2014 (sm) is written and produced by Cheryl Richardson. If you have any questions or comments, or for reprint permission of this newsletter, please email:[email protected].

Week 27 – Here’s a bold, in-your-face way of undermining a cultural...
Scroll to top