This week I accomplished a goal I set two months ago.

At the beginning of the year, in a moment of insanity, I decided to join a Crossfit gym. Crossfit is a workout program that combines a variety of functional movements like pull-ups, squats, push-ups, and gymnastics performed at high intensity.

I joined because I wanted to up my fitness level. I wanted to challenge myself to go way beyond what I thought I could do at my age. And I wanted to do it with others to avoid the isolation I often feel during the winter months.

I had no idea what I was getting myself into.

After an initial orientation and training period, I was ready for group classes and, by that point, I started to balk at going to the gym. I felt self-conscious. The workouts were hard. I compared myself to others. And I already felt like the oldest, most out-of-shape member in the gym.

But I went anyway.

On my first visit, I swear I started sweating before I ever lifted a weight

What am I doing here, I thought to myself as I walked over to the stretching area. This is crazy. I’ve made a mistake and I need to find a way to back out gracefully and get my money back.

I knew beforehand that there was a good chance I’d want to quit, so I made a deal with myself. Anytime I felt self-conscious or intimidated I would immediately smile at a stranger and say hello.

It was the opposite of what I’d normally do in this type of situation.

The smiling helped, people were welcoming and friendly, and so I kept showing up. By the third class I had a shift in perception that changed everything.

On this particular morning, once the stretching sequence was finished, we moved over to what looked like a giant jungle gym for adults. Beginning the warm-up part of the hour, we were instructed to start by doing pull-ups either on metal bars above our heads (not a chance), or by using the gymnastic rings hanging down in the center of the cage.

I chose the rings.

The starting buzzer went off and we began the workout. I planted my feet out in front of me, lowered my body to a forty-five degree angle from the floor and then raised and lowered myself, using the rings to guide my movements. Each time I pulled up on the rings, I told myself: You can do this. You belong here. You’ll be stronger in no time.

That’s when something awesome happened.

The loud music changed and one of my favorite songs – Everlong by Foo Fighters – started playing. Two men approached the cage down near my feet, jumped up and grabbed a metal bar above my head. They started doing pull-ups on either side of me, in unison.

As I continued to lift and lower my body to the rhythm of the beat, I noticed the men’s movements were now synchronized with mine and a crazy fantasy popped into my head: I imagined myself in my own music video flanked by two backup dancers swinging to the beat.

The image made me laugh out loud.

The guys looked at me and smiled.

I left the gym that day standing a little taller, feeling a little stronger, and convinced that I, too, could hang in there.

Just not on the pull-up bars… yet

Two months later, I’ve reached my goal of doing push-ups in good form and I’m able to do more squats than I ever thought humanly possible. The random aches and pains I used to feel in my knees are long gone, and I’ve made some new, health-conscious friends.

All because of a shift in perspective and a willingness to do the opposite of what I normally do.

While I don’t expect to become a champion athlete or a Crossfit queen anytime soon, I do intend to keep challenging myself.

I refuse to be a prisoner who lives inside a comfort zone that keeps her safe, but uninspired. 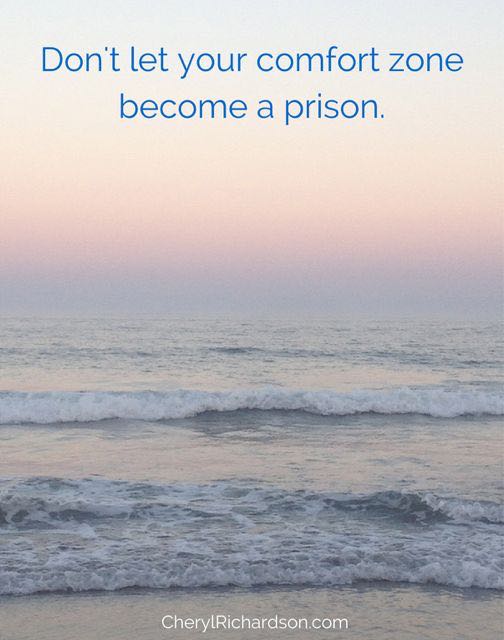 Here’s one of my favorite performances from Foo Fighters playing Everlong on David Letterman’s last show. You can watch it here. Enjoy!