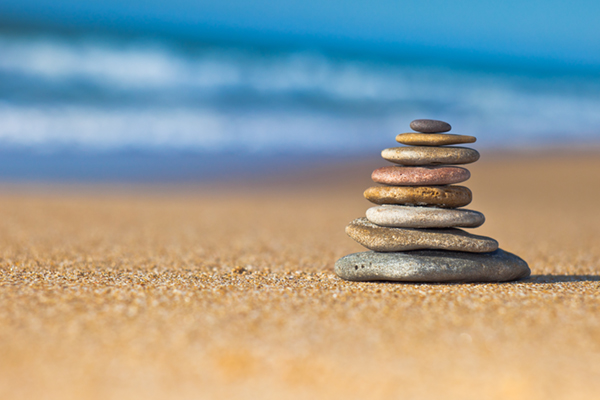 Last week was a doozy here at our house.

In the middle of having our front steps and walkway repaired, we discovered a serious water problem. The wood beams and facade under our front door had completely disintegrated and upon further investigation, we learned that the stone siding on the front of our home might need to be removed to repair large patches of rotted wood.

I stood staring at the house while the construction supervisor explained the problem and I thought I was going to throw up.

When the meeting was over I walked into the house, shut the front door, and burst into tears. Then I sat down on the sofa and did two things:

First, I searched for someone to blame.

Did the framers who sided the house do a shoddy job? Had the architect made a mistake when designing the gutter system? Was the builder asleep at the wheel when the water protection and stone were being installed?

After trying to assign blame, I then began imagining worse case scenario. I pictured thousands of dollars flying out of our retirement account, being woken up by banging nails and screaming saws, and spending hours trying to convince contractors to get the repairs done in a timely fashion.

It took two days of focusing on this madness before I came to my senses.

On the morning of the third day, I reminded myself that we had a great team of professionals who helped build our dream home. Everyone had the best of intentions and while mistakes might have been made that contributed to the problem, no one set out to create this mess.

After naming the truth, I realized I could either resist what is and suffer, or I could accept reality and take it on with grace and grit.

I chose grace and grit.

I renamed the water problem a “divine assignment” and decided it was put in my path to help me strengthen some important skills.

To that end, I set some ground rules:

When the stress of this project became overwhelming, I needed to get centered and grow myself back up so I wouldn’t react like a bratty kid to the people I’d be working with.

And when it came to people, my next rule was important:

Be loving and kind to everyone involved.

No one intended for this to happen and everyone felt bad – our builder, the supervisor, and the men who were investigating the problem. Pointing fingers at others would be giving my power away and I needed my power to handle the project.

Not only that, but loving people is so much easier than being mean and nasty.

The last rule of engagement was my salvation:

As much as it sucks to be dealing with a massive problem that could mean rebuilding the front wall of our home, the truth is, this is a first world problem. There are refugees who have been forced out of their communities, parents desperate to feed their children, and people struggling to find clean water.

We’re blessed to even have a home.

Armed with this point of view, I started to feel grateful. We had a roof over our heads and we were fortunate to have found the problem before it became a full-blown crisis.

As strange as it sounds, following these rules of engagement has turned a massive headache into a pleasant experience. Contractors have been responsive and enormously helpful. We have a wonderful man spearheading the repairs. And everyone is working hard to get the job done.

It’s amazing what a shift in perspective and a little love can do.

A surprise gift; astounding technology; and a really good-feeling video.  You can watch it, here.

Week 18 – Nora Ephron, the things we take for granted, and the list
Scroll to top